His upcoming talks focus on disability.  Disability is diversity, yet a manifestation that has often been ignored and marginalized. To overcome such bias, people with disabilities confronted cultural stigma and rigid boundaries used to strip fundamental civil and human rights.  This talk  addresses the long struggle for social and political change, highlighting the stories of people with disabilities — advocates, artists, authors — who forged pathways for inclusion.

His last talks (“Forest, Flood, and the Future (and Past) of Civilization”) shared ways for integrating environmental issues into the teaching of world history and geography and took place at the County Office of Education in:

In 2017, the CA State Board of Education appointed Dr. Herbst as a Content Review Expert (History-Social Sciences) for the review of new World and US History curricula for Middle School.  The new and modified curricula was submitted for approval to address the CA Framework for History-Social Science that the Board adopted in July 2016. 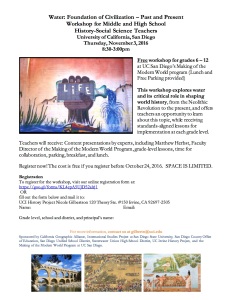 Prof. Herbst also created world history Summer Institutes for middle and high school teachers, funded by the National Endowment for the Humanities (NEH), and serves as a proposal reviewer for NEH summer institutes and seminars for teachers. 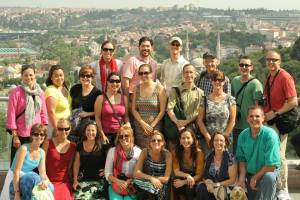 In 2013 and 2015, he offered “Istanbul Between East and West: Crossroads of Culture,” a Summer Institute which brought 50 middle and high school teachers to Istanbul for three-week programs of study and inter-cultural encounter.   The National Endowment for the Humanities funded both Institutes, each of which received more than 350 nation-wide applications for its 25 spaces.

The Summer Institutes brought social studies teachers to Istanbul for an intensive three-week program where they learned from leading scholars on Roman,

Byzantine, Medieval Mediterranean, Ottoman, and modern Turkish history. The 2015 faculty team was drawn from UC San Diego, UC Riverside, Ohio State University, University of Michigan, Arizona State University, and from Boğazici and Özyeğin Universities in Turkey.   This faculty team was comprised of distinguished scholars and recognized leaders in their respective periods of historical study.   Equally important, these scholars were outstanding and passionate teachers.

This Summer Institute provided teachers with a better understanding of a city and region that has been at the crossroads of regional and world history from antiquity to the present.   The Institute used Istanbul as an intellectual point of departure to explore the Roman/Byzantine and Ottoman Empires and modern Turkey. With its emphasis on cross-cultural encounters and global comparisons, the program situated this history in the larger context of the Mediterranean and Middle East and in the even broader framework of world history. The Institute integrated readings, lectures, and discussions with the most important text, Istanbul itself, making its monuments, museums, and urban geography part of the academic design.   Participants generated ways to incorporate the Institute content, which corresponded to the National Curriculum Standards for Social Studies, into their classroom instruction.

This video was made by Mr. Greg Sill, a Summer Scholar on the 2013 Summer Institute.