The Earth and its People:
Geology, Volcanology, and World History in New Zealand
New Zealand was the last country in the world to be settled (it had no human inhabitants before the Maori arrived in the fourteenth century), the first to give women the right to vote (in 1893), and contains geological and topographical terrain so extraordinary that it was the ideal setting for the Lord of the Rings movies.   How did this all come about and what is the significance for our contemporary world?  Join this Global Seminar in New Zealand to find out.
This program is based in Auckland, New Zealand and integrates the humanities and geo-sciences, by pairing a world history and a geology course, through which students will explore the natural and the human history of the region.   Prof. Herbst will co-lead this program with Scripps Institution of Oceanography geoscientist Dr. Geoff Cook.   The program will run from July 3 to August 5, 2017.

The world history course (MMW14GS) focuses on the Pacific Ocean in the context of world history, starting with Captain Cook’s voyages of exploration, which traversed the Pacific and mapped the coastline of New Zealand, paving the way for its later incorporation into the British Empire, as well as for Pacific Islanders to “discover” Europe and parts beyond, like Mai (or Omai) who visited London in 1774 after Cook’s first voyage and served as interpreter on Cook’s next two;

or Hongi Hika, a pivotal Maori chief of the Ngapuhi, who travelled to England in pursuit of European weapons for his tribe’s expansion in New Zealand’s North Island in the 1820s.

In 1840, Hongi Hika’s nephew was one of the signatories of the Treaty of Waitangi, which provided the “legal” mechanism to establish British sovereignty over New Zealand, with Auckland then becoming the new colony’s capital, far south of the Maori settlements at the Bay of Islands, where

the treaty was signed (an important historic site which we will visit on this program).

The course covers nineteenth-century imperialism by European nations, the United States, and Japan, and the variety of indigenous responses. MMW14 concludes in the early twentieth century with global revolutions (in Iran, the Ottoman Empire, Mexico, China, Russia) and international conflict, notably WWI. MMW14 will study New Zealand’s role in his war, including in the still-venerated 1915 ANZAC campaign, half a world away, at Gallipoli, which for a century now has been commemorated as a national holiday (April 25). The course will conclude with the nation’s entry into the League of Nations thereafter. 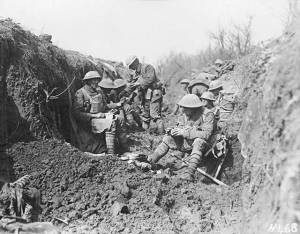 MMW14 addresses such major topics as imperial and economic inter-connections; the environment, including natural activity, like volcanic, and human-influenced change, such as the devastating impact of invasive species; scientific discovery, and it is notable that in 1835 Charles Darwin stopped in New Zealand’s Bay of Islands on the Beagle’s homeward journey, a location which had already become an important port-of-call for the whaling industry and for European merchants and missionaries; disease, from the virus that devastated the Maori population at the start of the course to the global influenza epidemic at the end; technological innovation, like steam ships that vastly increased the speed of ocean voyages and refrigerated cargo holds that made New Zealand mutton (and Argentinian beef) available to English dinner tables by the 1880s; European-Pacific Islander cultural interactions, for which, observers like Herman Melville,

Horatio Gordon Robley, and Paul Gauguin furnish paths of inquiry as did the spread of Christianity, Cricket, and Rugby; and finally, labor and migration, the impact of which is readily apparent in New Zealand today, with approximately 70% of the country’s populace having European ancestry, 20% identifying as Maori or other Pacific Islander culture, and 10% coming from South or East Asia.

The geology course uses the environment of New Zealand as a classroom for understanding the natural history of the region.