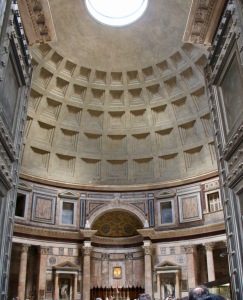 the revival of classical culture and ideas in the early modern world, as we experienced Rome and its environs and visited Florence in Tuscany as well.  One course studied the revival of classical culture and values during the Renaissance and the reaction against medieval ideas.  It then traced subsequent developments from the Protestant Reformation in the sixteenth century through the Scientific Revolution in the seventeenth century.  Rome – the eternal city and caput

mundi (world capital) – provided the backdrop for our study of the Renaissance, the Protestant Reformation, the discovery and conquest of the Americas, and the birth of the
scientific method.  The second course examined the city of Rome from a cultural, literary and historical perspective. We learned about Rome through reading, walking, and experiencing the streets, churches, and monuments of the city.